Located in one of the trees of Council House and Stirling gardens in Perth (Australia), eight "traditional" cuckoo-clocks, originally from Germany, Austria and Switzerland were installed far away from their associated place of origin. These popular touristic souvenirs opened their doors and shouted out «Cuckoo, Cuckoo» to this unsuspecting garden. As Perth is one of the most windiest town of the world, the time shown on the clocks changed in an unsteady way, depending on the (constant) moving of the little puppet. This project lent itself to satire the bizarre stereotypes and superficial clichés projected by the tourism industry

Installation with 8 cuckoo clocks in a cluster of bamboo during the festival
GARDEN // ART // ACTION, Perth (Australia), 2010 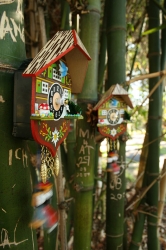 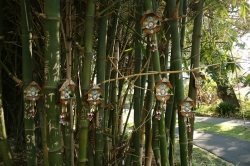